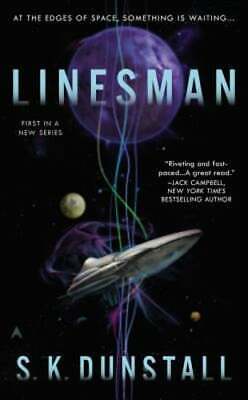 "The lines. No ship can traverse the void without them. Only linesmen can work with them. But only Ean Lambert hears their song. And everyone thinks he's crazy? Most slum kids never go far, certainly not becoming a level-ten linesman like Ean. Even if he's part of a small, and unethical, cartel, and the other linesmen disdain his self-taught methods, he's certified and working. Then a mysterious alien ship is discovered at the edges of the galaxy. Each of the major galactic powers is desperate to be the first to uncover the ship's secrets, but all they've learned is that it has the familiar lines of energy - and a defense system that, once triggered, annihilates everything in a 200 kilometer radius. The vessel threatens any linesman who dares to approach it, except Ean. His unique talents may be the key to understanding this alarming new force - and reconfiguring the relationship between humans and the ships that serve them, forever."

In a future where spaceships use lines to travel through the void, being a linesman who “communicates” with them is one of the most important positions attainable.

Ean Lambert is a linesman, but because he communicates with the lines in a different way, he’s seen as crazy. He sings to them instead of thinking to them, as all the other linesmen do.

When an alien ship is discovered, the only one who manages to communicate with it is “crazy” Ean Lambert with his singing. Soon enough, everybody around him starts singing a different tune.

I found this series while in the midst of a reading slump. The cover took me in – yes, sometimes we judge a book by its cover! – and the story made me want to read it, so I took it home. I could not stop reading it.

Ean is a very interesting character, but he’s not the only one. Every character in the story is charming in his or her own way, even those you might consider “bad.”
The Linesman series begins with Linesman, where they find out about the alien ship, then continues with Alliance, where the working of the allied worlds is presented, and concludes with Confluence, where the first confrontation between all the human worlds is explored.

S.K. Dunstall, two Australian sisters, work hard to present a universe where women are equal to men and where people develop in different ways on different planets. It’s a universe where humanity hasn’t yet encountered real aliens. The world-building in the series is very well-thought out and it all makes sense, even when it shouldn’t.

I was completely taken with Ean and how he deals with his insecurities, difficulties and the other characters around him. When I finished Linesman, I went back to ABC and took Alliance and Confluence home and read them non-stop during my vacation. This is such a well-constructed world!

Linesman is my go-to series when I’m in a slump. It makes me feel good, and I always find something new to ponder. How will the story of a certain character develop? Where will the story go? How many untrained linesmen exist in the universe? And ultimately: Will S.K. Dunstall write more about Ean and this universe?