Spring saw the release of a plethora of new Manga titles, both for new series and established ones. Here are our favorites. And as usual, if you can’ find what you’re looking for, get in touch with us and we will look for you! 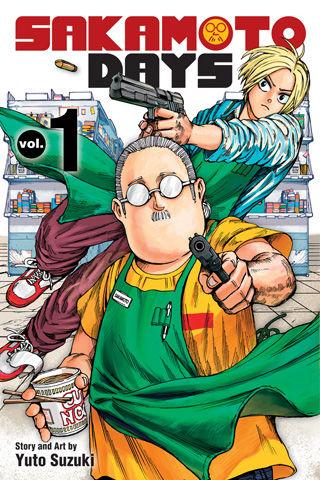 Story and Art by Yuto Suzuki

Taro Sakamoto was once a legendary hit man considered the greatest of all time. Bad guys feared him! Assassins revered him! But then one day he quit, got married, and had a baby. He’s now living the quiet life as the owner of a neighborhood store, but how long can Sakamoto enjoy his days of retirement before his past catches up to him?!

Time has passed peacefully for Sakamoto since he left the underworld. He’s running a neighborhood store with his lovely wife and child and has gotten a bit…out of shape. But one day a figure from his past pays him a visit with an offer he can’t refuse: return to the assassin world or die!”

Story and Art by Nene Yukimori

“A social butterfly makes friends with a wallflower – whether he’s ready or not!

Junta Shiraishi blends into the background so much that even his classmates fail to spot him. His goal is to make the most of his high school years, but that pesky invisibility gets in the way… until Nagisa Kubo notices him! Kubo’s playful teasing kicks Shiraishi out of his comfort zone and begins a friendship – or maybe something more?

When Kubo sits next to Shiraishi in their first year of high school, Shiraishi’s nonexistent social skills get a boost. Speaking up in class is only the beginning for Shiraishi – soon Kubo forces him to be noticed at school, at the bookstore, and all around town. Shiraishi’s once-lackluster life isn’t so dull anymore!“ 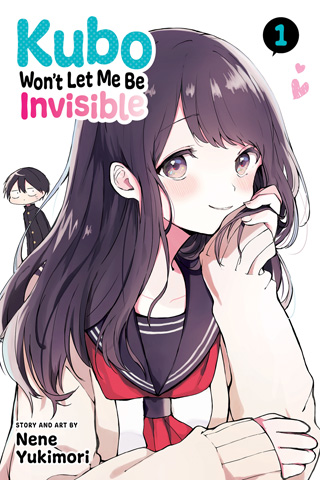 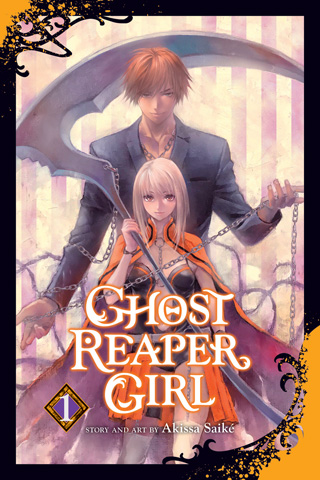 “Beware, evil spirits! Ghost Reaper Girl is on the case!

Chloe has dreamed of leading a glamorous life as an actress ever since she was little. But being the ripe old age of 28 might be working against her, and her spontaneous displays of violence aren’t helping either! Not all hope is lost, however – she might be perfect for the role offered by a mysterious and charming new man in her life. Can Chloe become the Ghost Reaper Girl and take down the evil spirits that have escaped from Hades?“

“The beloved fantasy adventure Inuyasha continues with the next generation of demon hunters!

Can the three teenage daughters of demon dog half-brothers Inuyasha and Sesshomaru save their parents, themselves, and both realms from the menace of the seven mystical Rainbow Pearls?

Living in the present day isn’t easy for Sesshomaru’s daughter Towa. She can’t remember where she came from, must conceal her mysterious powers, and is either worshipped or feared by girls she just wants to be friends with. 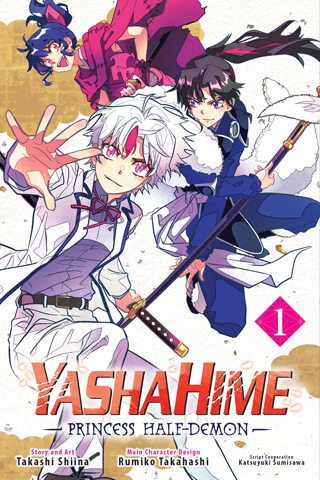 But she has no way of returning to her own time until one day… a demon attacks and she is transported to feudal-era Japan.

There Towa, her twin sister Setsuma, and her cousin Moroha – Inuyasha’s daughter – have a mission bestowed upon them by the mystical Tree of Ages. With only vague memories of their past to guide them, the three young women set out to find their parents, heal a rift in time, and fulfill their royal destiny…“ 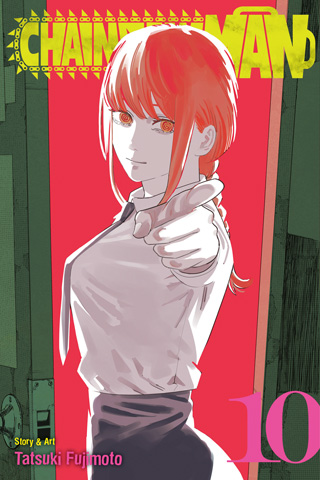 Story and Art by Tatsuki Fujimoto

“Broke young man + chainsaw dog demon = Chainsaw Man! Denji was a small-time devil hunter just trying to survive a harsh world. After being killed on a job, Denji is revived by his pet devil-dog Pochita and becomes something new and dangerous – Chainsaw Man! Having been forced to kill a friend, Denji finds that his brain has turned to mush from despair. Without the motivation to keep going, he seeks help from Makima.

But Makima is not what she appears, and Denji’s pain is only just beginning.”

Story and Art by Gege Akutami

“To gain the power he needs to save his friend from a cursed spirit, Yuji Itadori swallows a piece of a demon, only to find himself caught amid a horrific war of the supernatural! In a world where cursed spirits feed on unsuspecting humans, fragments of the legendary and feared demon Ryomen Sukuna were lost and scattered about. Should any demon consume Sukuna’s body parts, the power they gain could destroy the world as we know it. Fortunately, there exists a mysterious school of Jujutsu Sorcerers who exist to protect the precarious existence of the living from the supernatural! Sukuna is on a murderous rampage.

Meanwhile, invaluable Jujutsu Sorcerers have been taken down, and even Kugisaki falls into Mahito’s trap! Feeling the burden of his sins, Itadori finds it hard to keep going, but he rushes off to help Kugisaki anyway. Can he reach her in time?!“ 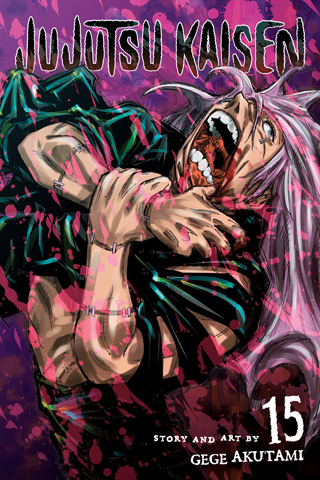 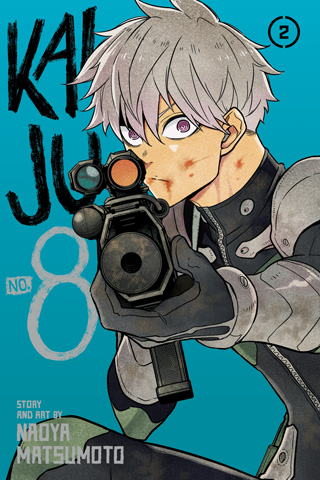 Story and Art by Naoya Matsumoto

“Kafka wants to clean up kaiju, but not literally! Will a sudden metamorphosis stand in the way of his dream?

With the highest kaiju emergence rates in the world, Japan is no stranger to attacks by deadly monsters. Enter the Japan Defense Force, a military organization tasked with the neutralization of kaiju. Kafka Hibino, a kaiju-corpse cleanup man, has always dreamed of joining the force. But when he gets another shot at achieving his childhood dream, he undergoes an unexpected transformation. How can he fight kaiju now that he’s become one himself?!

The final test of the Defense Force has come to an end, but the examinees’ challenges aren’t over yet. A mysterious humanoid kaiju revives a neutralized honju and sics it on Kikoru Shinomiya. Just when Kikoru seems to be at the end of her rope, Kafka rushes to her defense! But what is the humanoid kaiju’s goal?“

“Is Kira’s story truly over, or does his influence linger? In this complete collection of Death Note short stories penned by the series’ creators, you will discover tales of lives irrevocably changed by the sinister influence of the Death Note, with surprising and thrilling answers to the question of what it truly takes to use the Death Note… or fight it. Contains the stories “C-Kira,” “a-Kira,” the Death Note pilot chapter, vignettes of L’s life, and more.“ 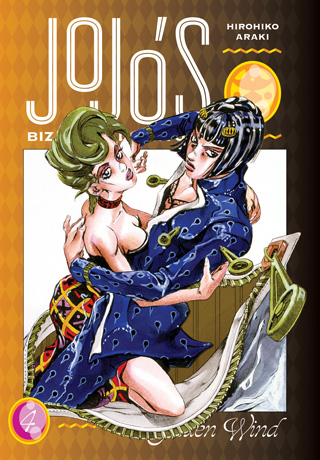 Story and Art by Hirohiko Araki

“A multigenerational tale of the heroic Joestar family and their never-ending battle against evil!

The high-speed conflict continues! The express train is zooming its way to Florence, and the squad is hanging on for dear life – literally! They’re under siege by their foes, desperate to protect their charge and facing an all-new enemy Stand. The stakes have never been as high as this, and to make matters worse, escaping the train doesn’t mean they’ve escaped the danger!”

Story and Art by Tatsuki Fujimoto

Denji was a small-time devil hunter just trying to survive in a harsh world. After being killed on a job, he is revived by his pet devil Pochita and becomes something new and dangerous – Chainsaw Man!

Chainsaw Man has escaped Makima’s attempts to control him so far, but she now reveals the full extent of her plans. Denji will need the help of his remaining friends if he is to have any chance of defeating Makima in their final confrontation!“ 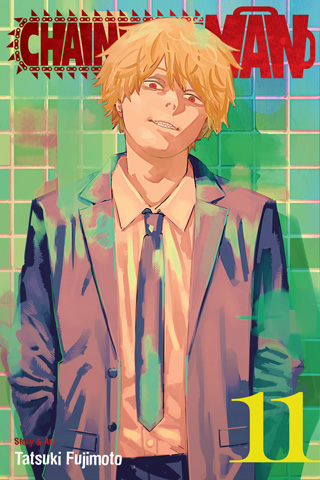 Story and Art by Tomohito Oda

“The journey to 100 friends begins with a single conversation.

Socially anxious high school student Shoko Komi’s greatest dream is to make some friends, but everyone at school mistakes her crippling social anxiety for cool reserve. Luckily she meets Tadano, a timid wallflower who decides to step out of his comfort zone in order to help her achieve her goal of making 100 friends.

Najimi takes the role of Komi’s friendship mentor very seriously (sometimes), so when it comes to light that Komi has only made eight new friends this school year, Najimi steps in to remedy the situation. But can the friendly blind date Najimi sets up lead to anything but awkwardness when everyone there has a communication disorder?!”