ABC’s Christmas of 1973 was quite eventful. Mitch, who had co-founded ABC the year before, went back to Baltimore for the holidays and left me in charge while we were renovating. He and the landlord, Jacob Kroonenberg, had agreed to level out the ground floor, which had been split-level, and to add a circular staircase to make more sales space accessible on the upper floor while adding offices way upstairs. The contractor was busy hacking out old tiles and bricks in the basement in mid-December. Avo and I were getting married on January 2nd, and my family was coming over from Minnesota during the Christmas vacation.

Meanwhile, Avo had just gotten his Master’s degree and started his first job. We bought our first apartment and moved in on December 15th. The apartment had one bedroom with no door. Luckily, my family was able to sleep upstairs in the neighbor’s attic space, gracefully slumming it on the floor and on couches.

This all took place during high retail season. We weren’t set up to do anything special for Christmas; no Christmas decorations or anything really. We had about 12 people working in the store at that time because we were open seven days a week from 9 in the morning till 11 at night, which took a lot of shifts.

Suddenly, a flu epidemic hit the store between Christmas and New Year’s Day! Literally, everyone but me was out sick or on vacation. Could we open the store at all?

I asked my brother Paul, who was 14-years-old at the time, if he’d be willing to help. He was, so we went downtown in the morning and I showed him how to work the cash register. We walked around straightening stock, greeting customers and helping out as needed. I think we closed at 6pm—a lovely and memorable day spent with my brother.

The next day, other staff members returned to work so I could take a couple days off before my wedding. Avo and the rest of the family were preparing food. My brothers and father hung us a bedroom door as a wedding gift. 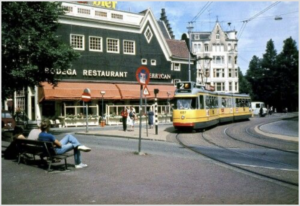 The Sherry Can back in the day, located opposite our current store on the Spui.

Mitch was back in town by then and sponsored our wedding reception at the now defunct The Sherry Can on the corner of Spui and Singel. Afterwards, we held a party in our apartment with homemade Middle Eastern and American food, an impromptu string quartet and lots of rock n roll.

By 1979, we were a bit more organized and recruited an American-style Santa Claus to ask children what they wanted for Christmas. At the time, Christmas wasn’t nearly as big a celebration as Sinterklaas, and there wasn’t a gift-giving tradition around that holiday. New Year’s Day was celebrated by getting all dolled up for champagne and fireworks. Sinterklaas on December 5th was the main winter celebration. Here’s a picture of my young daughter Nadine (who today is co-owner of ABC!) with bookseller and author Rachel Pollack dressed as Santa. 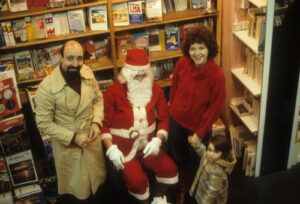 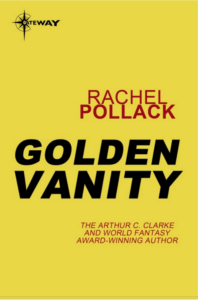 Rachel, born Richard, worked at ABC in the early days after being one of our best customers. Every Friday evening, when the new titles arrived from the States, another of our regular customers, Paul, would carefully choose a copy of every single new title, relying on Rachel for background advice. One evening, a customer came to the cash register with a copy of Rachel’s book Golden Vanity opened to the title page and asked in a whiny voice: “When’s the sequel to this book coming out? It says here it will be released in April but it’s already June!”

Rachel replied coolly, “Yes, sorry about that. I haven’t finished the manuscript yet.” Now that’s a bookseller!