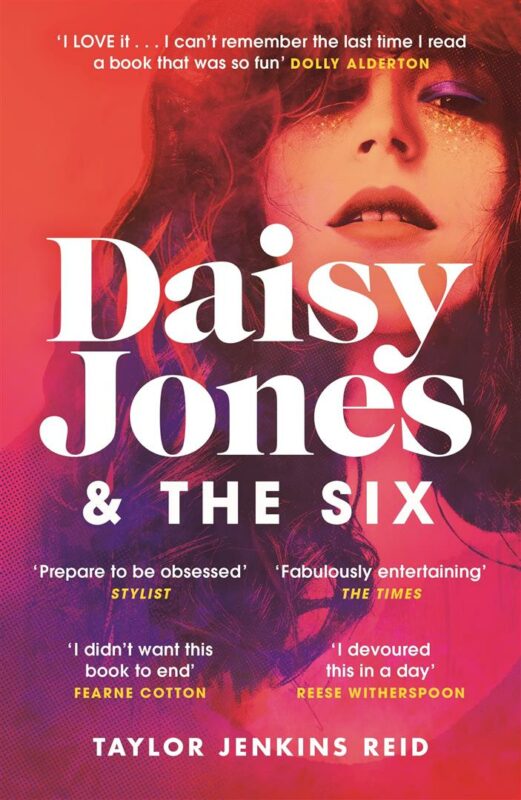 "There was Daisy, rock and roll force of nature, brilliant songwriter and unapologetic drug addict, the half-feral child who rose to superstardom. There was Camila, the frontman's wife, too strong-willed to let the band implode - and all too aware of the electric connection between her husband and Daisy. There was Karen, ice-cool keyboardist, a ferociously independent woman in a world that wasn't ready for her.

And there were the men surrounding them: the feuding, egotistical Dunne brothers, the angry guitarist chafing on the sidelines, the drummer binge-drinking on his boat, the bassist trying to start a family amid a hedonistic world tour. They were creative minds striking sparks from each other, ready to go up in flames. It's never just about the music..."

Daisy Jones & The Six is Taylor Jenkins Reid’s sixth novel—the second in a quartet of books set in the same universe. There’s no need to read them in order, but if you’ve read The Seven Husbands of Evelyn Hugo, Malibu Rising or Carrie Soto is Back, you’ll definitely recognize some names. Much like the other books in the quartet, Daisy Jones feels like a breezy summer read while not shying away from more serious topics. Reid took liberal inspiration from the real-life music scene of the 1970s (Fleetwood Mac is an obvious source), but this dive into the dark side of sex, drugs and rock & roll never feels reductive.

The first thing you’ll notice about the story is its unusual narration: it’s written in the form of interviews with the characters. This means there are many narrators, and all of them have different recollections of how exactly things went down. Balancing all these voices can’t have been easy for the author, but while Daisy and Billy are clearly the main characters, the others get plenty of time to have their say.

Part of the fun for me was in the contradictions – sometimes about inconsequential things such as the color of someone’s dress, but sometimes about pivotal moments in the band’s shared history. There’s no way to know what “really” happened, so it’s up to the reader to decide whose memories to trust.

It’s clear from the start that the story is building up to the band’s “irrevocable fall” – it’s part of the blurb, after all – and because of that the tension is not so much in what is going to happen, but instead in how it will happen. I found myself rooting for these deeply flawed characters despite wanting to smash their heads together every few pages. Daisy in particular seems so aggressively yet convincingly bent on self-destruction that you almost want to reach into the page and pull her out, just to protect her from herself.

I wasn’t surprised to learn that a book-to-screen adaptation of Daisy Jones & The Six is on its way. A release date has not been announced, but the series will more than likely drop before the end of this year. Personally, I’m most curious about the soundtrack, because all I’ve wanted to do since reading this book is listen to the songs described in the story. (By the way, if you can’t wait to get some idea of what Daisy Jones & The Six would have sounded like, the official Random House account on Spotify features a playlist with songs that match the sound envisioned by the author.)

I highly recommend this book to anyone who loves the music and bands of the 1960s and ‘70s, anyone who liked Songs in Ursa Major by Emma Brodie or Mary Jane by Jessica Anya Blau (click here to watch Blau’s guest appearance on ABC Staff Picks), anyone who enjoys celebrity drama (especially in the music world), and of course, anyone who liked Taylor Jenkins Reid’s other books. Let’s hope the screen adaptation lives up to the paper version!