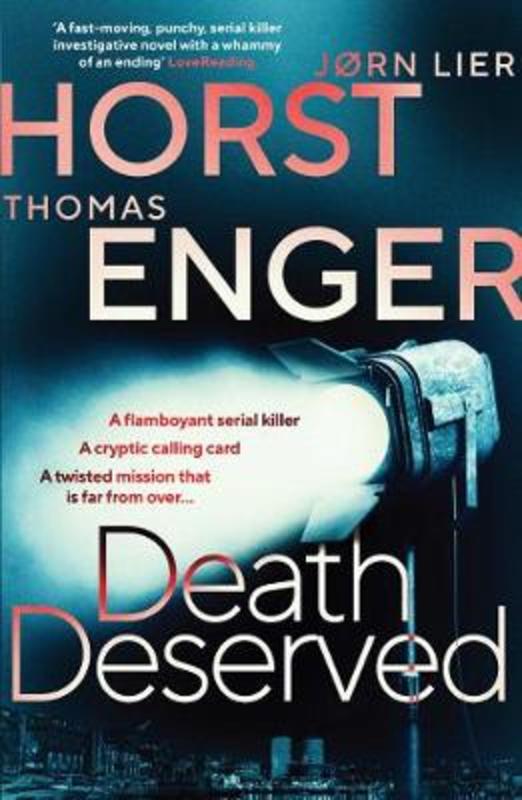 "Oslo, 2018. Former long-distance runner Sonja Nordstrom never shows at the launch of her controversial autobiography, Always Number One. When celebrity blogger Emma Ramm visits Nordstrom's home later that day, she finds the door unlocked and signs of a struggle inside. A bib with the number 'one' has been pinned to the TV.

Police officer Alexander Blix is appointed to head up the missing-persons investigation, but he still bears the emotional scars of a hostage situation nineteen years earlier, when he killed the father of a five-year-old girl. Traces of Nordstrom soon show up at different locations, but the appearance of the clues appear to be carefully calculated ... evidence of a bigger picture that he's just not seeing...

Blix and Ramm soon join forces, determined to find and stop a merciless killer with a flare for the dramatic, and thirst for attention.

Trouble is, he's just got his first taste of it..."

Death Deserved by Jørn Lier Horst and Thomas Enger is the first book in the “Alexander Blix & Emma Ramm” series set in Oslo, Norway. The story features police officer Alexander Blix and celebrity blogger Emma Ramm, who join forces to stop a serial killer who is targeting celebrities and has a flair for the dramatic.

The serial killer purposefully leaves behind clues for the Oslo police force to discover the motive and pattern behind the killings. Alexander Blix, troubled by a hostage situation gone wrong 19 years ago during which he killed the father of a five-year-old girl, struggles to find his footing in this missing persons and murder investigation.

The story is told from a dual perspective, giving you a feel for both Blix and Ramm’s personal struggles during the investigation. We learn that Blix has a daughter who takes part in a Big Brother-like reality show, which will play a major role further in the story.

The dynamic between these two characters is palpable, and I enjoyed learning how they worked together while also getting to know them as individuals. I only wish there was more focus on Emma Ramm, as I found her character to be quite interesting. We learn that she suffered a traumatic event during her childhood, and how it still haunts her in her relationship-building and journalistic aspirations. This focus on the inner workings of the mind of either the perpetrator or the detective(s) is one of the things that draws me to the crime genre.

What surprised me most while reading Death Deserved, though, was its unpredictability, which I find essential when reading a crime novel. It was fast-paced without feeling rushed. Throughout the book, I was intrigued by the turn of events and wondered how the story would end. I found this to be a truly well-written game of cat-and-mouse, and it had me second guessing who the killer was until the very end.

I discovered this Nordic crime series while browsing at a book store in Norway this summer. Travelling through Norway definitely sparked my desire to read Norwegian crime. The country’s cold climate and vast nature draws you further into the dark settings that are often characteristic of Scandinavian crime novels.

Jørn Lier Horst and Thomas Enger are also the authors of Smokescreen and Unhinged, the second and third instalments in the series. The fourth book is set to be published in the spring of 2023.