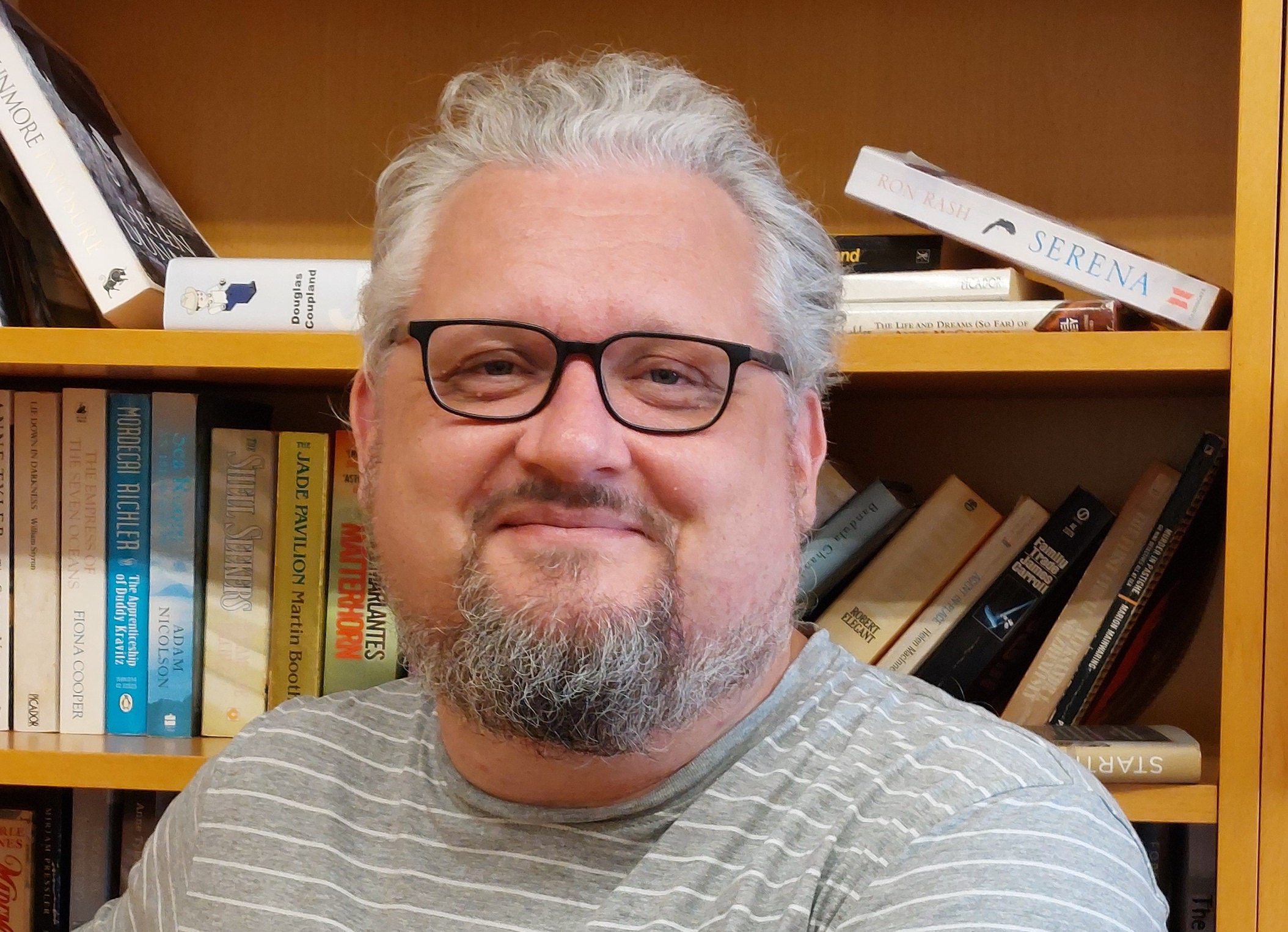 Herman is a long-time customer in The Hague who likes to have conversations and exchange opinions with us. We usually see him two or three times a week in the store, where he comes just to browse our bookcases and talk to us.

ABC Lília: Hi, Herman, thanks for speaking with us for our 50th anniversary!
Herman: It’s a pleasure.

ABC Lília: How long have you been an ABC customer? And how did you discover ABC?
Herman: Since I was around 15-16 years old—I’m now 44—so for around 28 years. I lived close by and my school was also close by, so when coming back from school one day, I passed along the store here on the Lange Poten. It was love at first sight.

ABC Lília: Why do you shop with us?
Herman: Because I have an interest in the English language and literature. I studied English literature, I am an English teacher at the art academy in Rotterdam, and ABC is the best shop for English language books. Even with many competitors, it still has the best and broadest offerings. You have a wide variety of titles and sections that I’m quite interested in. That’s why I started shopping here. And that’s why I keep coming back!
At first, I wanted to buy some classics – there was back then this very cheap classics edition, and you had a whole section for them – and plays. I’ve always been interested in theater, and even if your drama section has never been really extensive, I always could find something of value. Another reason I came in was RPG – Role Playing Games – which I liked a lot. You used to have lots of books and merchandise on RPG at the front of the store, so that was another reason to browse.
Then I started studying English, and it was just natural to keep coming here. I had a student discount for many years, then I started teaching English at university, and nowadays, I have the teacher’s discount. I even used to have the Teacher’s Discount Card at one point, before it became virtual! It’s always a tiny bit awkward that I can’t simply show a card the first time around with a new employee who doesn’t know me yet. They ask: “Do you have a discount card?” And I answer: “Yes, a ‘virtual’ discount card.” And they have to check the teacher’s database. But they all get used to me rather quickly since I come here often. After three or four weeks, they say, “I’ve seen you before… I know now you’re a teacher.”

ABC Lília: How important it is for you to support an independent bookstore?
Herman: Very important. I enjoy browsing here, and if you didn’t exist, I would have to shop online or in those big bookstores that usually only have general stock. It’s very nice to be surprised and it’s lovely to go to the information desk and order books that are not easily found at other bookstores.

ABC Lília: I think the main difference is that we import books ourselves, so our range is wider than Dutch bookstores.
Herman: For sure. You also pay attention to what’s been sold. You all have your own sections and listen to customers. It’s the great benefit of an independent bookstore, the main difference being the customer service you offer. You’re quite upfront with the information you give. Instead of simply saying you can’t order it, it’s usually, “Sorry, we can’t order it because the supplier does not have it in stock at the moment.” Better to get a “why not” than a simple “no.”

ABC Lília: Is there a book or an author who changed your life? And what was the change?
Herman: That’s such a big question! I have many authors and books that have influenced me through the years. I have a general answer because theater is so important to me, and Shakespeare, the Greek dramatists and many other playwrights have been important. If I had to choose, it would indeed be Shakespeare, Oscar Wilde for his comedy and language and the Greeks. They all had a huge influence on different phases of my life, both concerning art and life.
Those three influenced me to do theater, and acting actually made me dare to become a teacher, where I use a lot of performing and acting techniques. Theater and teaching don’t necessarily have any relation to each other, but they do for me. Theater allowed me to dare to try out different things and gave me the tools to teach in a different way that works for me.
I would hate to have to choose a favorite book, because it’s an impossible task. It changes with your life and through the years, and I would never be able to name just one.

ABC Lília: Do you have an ABC anecdote to share?
Herman: I witnessed a fun little moment. One day, I went to the information desk and one of the employees called someone. The customer close to me picked up their phone and it turned out to be the customer the employee was calling. He wanted to tell them the book they ordered had arrived at ABC. And the customer answered, “Yes, I’m at the American Book Center.” It was lovely to see the confusion between them. And it was also quite interesting to see how miscommunication can be a tool for comedy, how easily people misunderstand what’s going on. It took a while for the customer to realize they were being called by ABC, rather than needing to figure out “How do you know I’m at the American Book Center?” It was a nice, funny incident to witness.

ABC Lília: Which book – or author! – would you recommend as essential reading? Besides Shakespeare, Oscar Wilde and the Greeks, of course.
Herman: (Laughing) Besides them, naturally!
There are so many good authors, it’s impossible to answer! But if I would have to narrow it down to a few, they would be Audre Lorde, Jane Austen, Ralph Ellison (author of Invisible Man), Eimear McBride, George Saunders, Neil Gaiman and Virginia Woolf, among others.

ABC Lília: What was the last book you read? Or that you’re reading at the moment?
Herman: I’m now reading and enjoying Companion Piece by Ali Smith. It’s a companion – it’s in the name – to her Seasonal Quartet books.

ABC Lília: Herman, thanks again for your time and willingness. It was lovely talking to you and learning more about you and your passion for books!