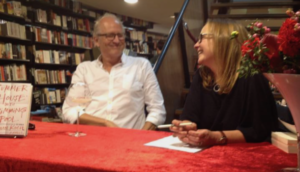 Lauren is not only a customer but also our blog editor. She’s an avid reader, so when she moved to the Netherlands back in 1996 to work as a journalist, she just had to find the ABC.

ABC Lília: How long have you been a customer at the ABC? And how did you discover us?
Lauren: I moved from New York to The Hague in 1996 to cover the new war crimes tribunal for the former Yugoslavia. I was walking around in the center, saw the word “American” and was intrigued. I went in and found this cozy and very welcoming bookstore, with only English language books. At that time, when the internet was still relatively young, information was still mostly found in books and magazines, so it was the perfect place for me to be.

ABC Lília: Why do you shop with us?
Lauren: For the English language books, for sure! And the magazines, which if people don’t know, are also available on sale in the back when they’re not the latest editions. Magazines tend to be expensive, so I really appreciate that service. But I love bookstores in general and the ABC in particular. I live in Amsterdam now, so I go to the store on the Spui. I love the atmosphere, the smells, everything. And I want to support independent bookstores. Buying online is easy and convenient—and I admit to having done it more than once!—but going to a physical store is a lot nicer and worth the effort. It speaks volumes that the ABC has been around for 50 years! It’s great to see people who have worked here for decades, who are so knowledgeable and passionate about books. I want to support the store as much as I can. It’s my happy place.

ABC Lília: Is there a book or an author who changed your life? And what was that change?
Lauren: As others before me have said, that’s such an impossible question! I think it depends on the time in your life. I have had different influences at different phases in my life. When I was in 3rd grade, around 9 years old, I was obsessed with biographies.

When I was 10, I read a book about slavery from the point of view of a young slave girl. At that age, reading about slavery was really huge for me. It was the first time I’d heard about it. I just found the book again on my bookshelf—with an inscription from my 10-year-old self to my future kids!

During high school, I was fascinated by Tomas Mann’s Tonio Kröger. His description of unrequited love resonated with me. A high school teacher gave me Even Cowgirls Get the Blues by Tom Robbins, and it was very important in those formative years. The Myth of Sisyphus by Albert Camus became my philosophical rock. And Who Killed Karen Silkwood by Howard Kohn, the story of a factory worker at a plutonium plant who became a nuclear whistle-blower and was killed under very suspicious circumstances. I read it in high school and it made me want to become a reporter and expose all these evils in the world! (Spoiler alert: although I am a journalist, I am not an investigative reporter.)

Graham Greene’s The Quiet American and Joseph Conrad’s The Heart of Darkness were huge for me in college.

My favorite books of all time, though, would have to include The God of Small Things by Arundhati Roy and anything written by Michael Chabon. I love his The Yiddish Policemen’s Union and Moonglow. Salman Rushdie’s Midnight’s Children is also fantastic, with absolutely gorgeous writing, and Gabriel Garcia Marquez’ Love in the Time of Cholera would also have to be on that list. I’m going to stop now!

ABC Lília: Writing has a great influence on your life, so it makes perfect sense that you have many titles and authors making an impression on you.

ABC Lília: Do you have an ABC anecdote to share?
Lauren: Yes, I do! When I came to live in the Netherlands I didn’t know anyone. I was alone a lot and just starting to get into cooking. I went to the ABC and found The Dean & DeLuca Cookbook based on recipes from the New York store I’d been to many times. There are incredible recipes in it, and it really teaches you how to cook. Years later, when my father turned 80 and our entire family was celebrating in the US, I wanted to make Dean and DeLuca’s paella recipe that I’ve been making for years. I didn’t have the book with me—it was too heavy to carry overseas!—so I looked online for the recipe but couldn’t find it. The book was published in 1996! So I got in touch with the store, and they very kindly emailed me the recipe with their best wishes to my father. It’s all a bit old school, but every time I crack open the cookbook, it brings me back to ABC and my early days in the Netherlands.

I also had the opportunity to interview Herman Koch here at the ABC in Amsterdam, in 2015 when he wrote Summer House with Swimming Pool. That was quite an honor.

ABC Lília: Which book or author would you recommend as essential reading?
Lauren: What is essential reading? For me, the most important thing is that we read. I happen to love Michael Chabon, who also wrote The Amazing Adventures of Kavalier and Clay. He’s not always the easiest to read, but he’s my favorite these days. I was never a mystery reader, but a friend introduced me to Sara Paretsky and I fell in love with her badass, whiskey-drinking, baseball-loving, social-justice crusading main character, V.I. Warshawski. So, for me, the most important thing is not exactly what you read, as long as you do it.

ABC Lília: Which was the last book you read, and what are you reading now?
Lauren: Because I’m a journalist, I love to read fiction as a way to unwind from the news. One of the last books I read was Pachinko by Min Jin Lee. And then I found The Inheritance of Orquídea Divina by Zoraida Córdova in my bookshelf, where I often “shop” for books if I can’t get to the ABC! Currently, I’m reading The Sentence by Louise Erdrich, and I absolutely love it. ABC’s Lynn recommended it, and I want to pay it forward and recommend it to everyone!

ABC Lília: Thanks for this interview, Lauren.
Lauren: It was a pleasure. We’ll see each other around the ABC.